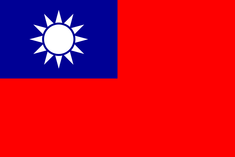 From where we left off

So far I have written 7 blogs covering the history of China from ancient times to the end of imperial rule in 1912. This blog enters a new chapter in Chinese history, covering the time of Republic of China when it ruled mainland China in the early 20th century. 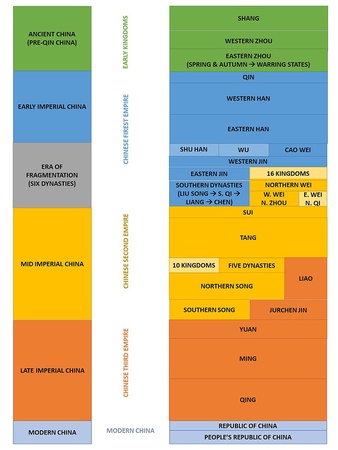 The Qing dynasty declined in the 19th century due to internal rebellions and external defeats. Attempts to reform the Qing government were too little too late. Many revolutionary groups were formed by intellectuals, gentry and businessmen, overseas Chinese etc. In 1905, Sun Yat-sen united these groups and established the Chinese United League in Tokyo, with the slogan "to expel the Manchus, to revive China". Sun formulated the Three Principles of the People, namely Nationalism, Democracy and Livelihood. These were later enshrined in the constitution of Republic of China. 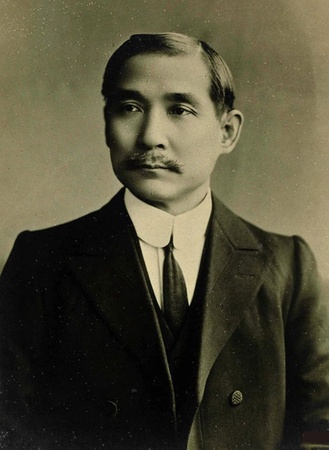 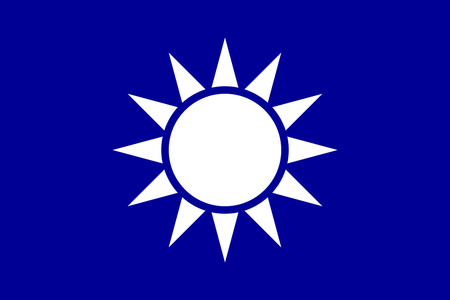 Emblem of the Chinese United League or Tongmenghui, the predecessor of the Nationalist Party or Kuomintang (KMT)

Since the defeat of the First Sino-Japanese War in 1895, there were over a dozen of uprisings but they all failed. Some significant ones included the Second Guangzhou Uprising in which 72 martyrs were killed in April 1911. In August, massive protests broke out in Sichuan province over the Qing government's plan to nationalise the Chengdu-Wuhan rail development project and to transfer control to foreign banks. Troops in Hubei province were sent west to suppress the protests, creating an opportunity for the revolutionaries in Wuhan to launch the Wuchang Uprising. On October 10th, revolutionaries together with elements of the Qing's New Army sympathetic to the revolution cause revolted and soon took control of the entire city. The rest of this and the subsequent fall of the Qing dynasty were already described in my previous blog.

Note that October 10th is still celebrated as the national day in Taiwan and Chinese diasporas around the world. Another interesting thing to note is that the Chengdu-Wuhan railway as originally planned was not completed until 2012 as part of the high-speed rail program, some 101 years after the Railway Protection Movement.

When Yuan Shikai managed to get the Qing emperor to abdicate, Sun Yat-sen kept his promise and let Yuan become the first president of the republic. Yuan refused to move to Nanjing, and forced the government to move to Beijing where his Beiyang Army was based (hence the name of the government).

In 1913, in the first parliamentary election, the Nationalist Party (aka Kuomintang or KMT) led by Song Jiaoren won the majority. Song planned to put his party members in the cabinet to limit Yuan's power, but was assassinated before parliament convened, widely believed to be ordered by Yuan. Yuan Shikai then bypassed the parliament to obtain a £25m foreign loan to beef up his army base. Sun Yat-sen launched the Second Revolution against Yuan, but it was quickly quashed and Sun hence fled to Japan. Yuan Shikai then expelled the Nationalists from the parliament and began his dictatorial rule. 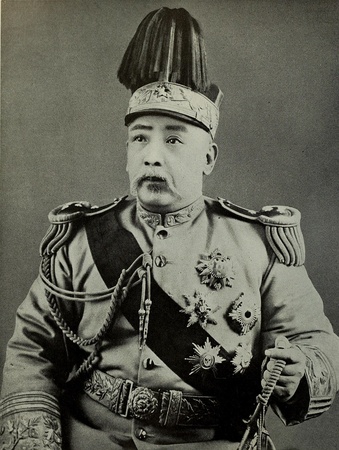 Yuan Shikai, the first president of Republic of China. He died soon after his failed attempt to become emperor in 1916. 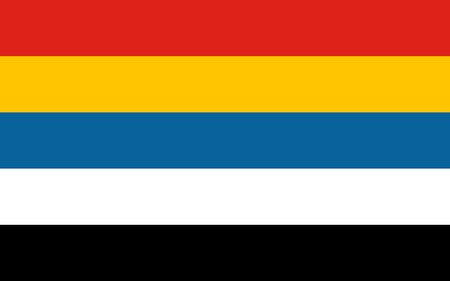 However, Yuan Shikai was not satisfied with being the president and wanted to be an emperor (this was partly encouraged by his son). In 1915 Yuan crafted a monarchist movement which symbolically begged him to take the throne. He would "humbly refuse" each time until he finally "reluctantly accepted" and was crowned Emperor of China.

The Empire of China was short-lived though. With widespread public outcry, universal opposition and his lieutenants deserting him, Yuan Shikai had to abolish the monarchy in March 1916 after only 83 days. He died from illness in June the same year. 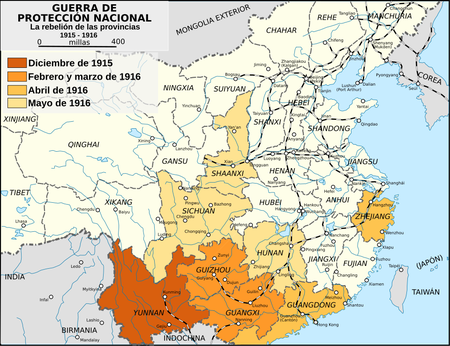 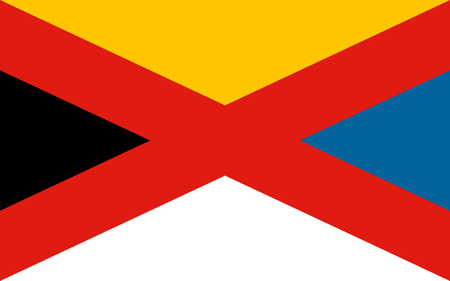 Flag of the Empire of China

Yuan's death created a power vacuum and started the Warlord Era. The Beiyang Army was split into three cliques, namely the Zhili Clique (now Hebei), the Anhui Clique and the Fengtian Clique (now Liaoning). They fought each other for control over the Beiyang government. Many other warlords controlled the other provinces and China effectively plunged into anarchy.

In 1917, disagreements between the warlords on whether to join the Allied Force against Germany in World War I created an opportunity for loyalist general Zhang Xun to enter Beijing with force and restore the Qing dynasty and Puyi as emperor. The so-called Manchu Restoration lasted for mere 12 days, before it was defeated by the Anhui Clique. This was the last attempt to impose imperial rule upon China.

Meanwhile, Sun Yat-sen returned to Guangzhou in 1917. With the help of the Yunnan and Guangxi warlords, he set up a rival government in the South under the Constitutional Protection Movement (aka the Third Revolution), against the fractured and dysfunctional Beiyang government in the North. 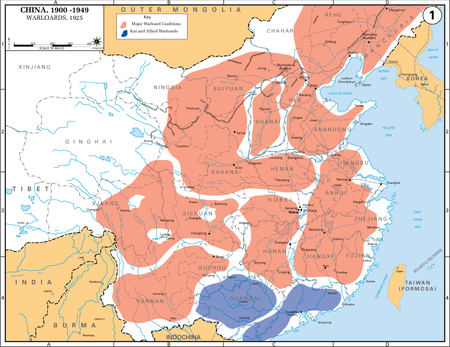 Warlords in 1925. The KMT controlled the blue area in the south.

This, together with the more general New Culture Movement, were significant in Chinese history and culture. During this period, there were widespread intellectual debates on refuting traditional Chinese culture and Confucianism, and adopting Western culture, democratic values and a focus on science. This was a watershed period when Vernacular Chinese replaced Classical Chinese in literature. Interest in Marxism and the Russian October Revolution in 1917 led to the formation of the Chinese Communist Party (CCP) in 1921. 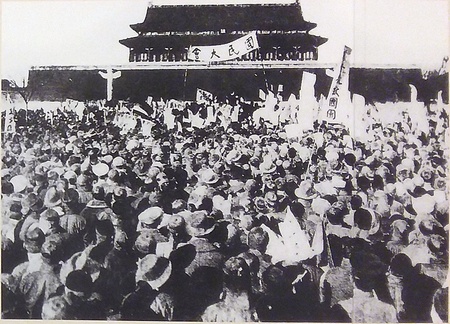 Student protests in Tiananmen Square on 4th May 1919, dissatisfied with the Treaty of Versailles for China. 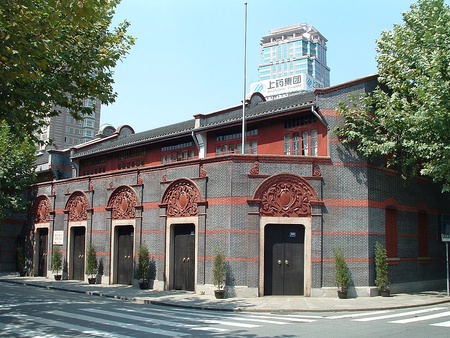 After Sun's death in March 1925, Chiang Kai-shek became the leader of the KMT. In 1926, Chiang led the Northern Expedition against the Beiyang warlords. Chiang received help of the Soviet Union and the Communists, while the Japanese supported the Beiyang warlords. The Northern Expedition paused in 1927 when Chiang purged the Communists within the party, causing a political split within the KMT. It was resumed in 1928 and with the assistance from allied warlords, the KMT forces successfully captured Beijing and overthrew the Beiyang government. 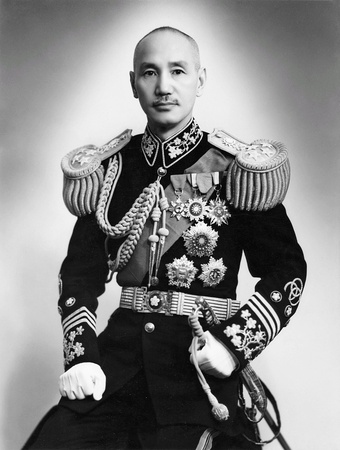 Chiang Kai-shek, or romanised as Jiang Jieshi, president and generalissimo of the KMT 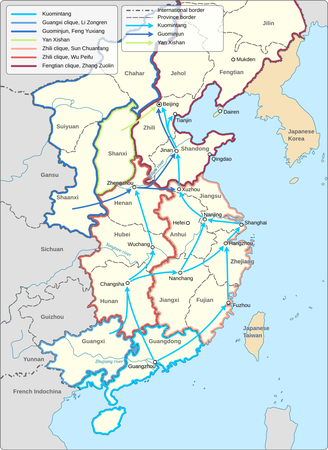 Routes of the Northern Expedition

The Fengtian Clique warlord Zhang Zuolin fled from Beijing to Shenyang and was assassinated by the Japanese for failing to stop the KMT. His son Zhang Xueliang inherited Northeastern China and announced an armistice with the KMT. He changed the flag from the Beiyang's 5-colour one to the Nationalist one at the end of 1928, nominally united China under one government in Nanjing (although local warlords still had semi-autonomous control over many provinces). Beijing lost its status as the capital and was renamed to Beiping. 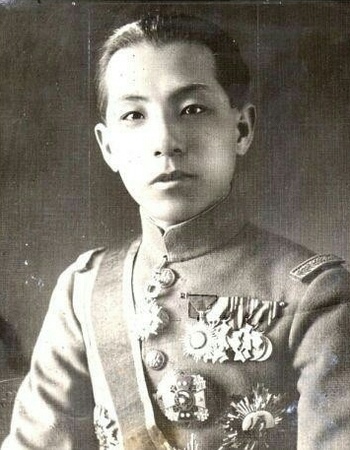 Chang Hsueh-liang, or romanised as Zhang Xueliang, helped unify China with the Northeast Flag Replacement in 1928, and later in the Xi'an Incident in 1936 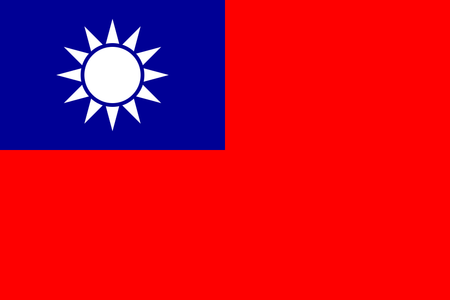 The period between the Northern Expedition and the outbreak of the Second Sino-Japanese War in 1937 was called the Nanjing Decade, marking a golden period of good economic progress and development under the relatively stable Nationalist government, especially with help from Germany (which suffered badly after WW1 and the Great Depression). The German Weimar Republic was the first European country to treat China on equal terms since the Opium War.

However, the period was marred by government suppression of dissent, corruption and nepotism, revolt of several provinces, conflict within the government, the survival and growth of the Chinese Communists, and the growing aggression by the Japanese. 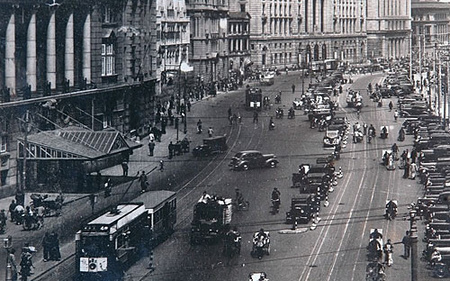 Since the split between the Nationalist (KMT) and Communist (CCP) in 1927, the CCP launched uprisings in Nanchang and Guangzhou and formed the Red Army in 1928. KMT forces continued to suppress the rebellions, marking the start of "Ten-Year Civil War". The KMT launched a series of five encirclement campaigns against the CCP, and in the fifth campaign in 1934, the KMT forces surrounded the Communist areas and cut off their supplies and food sources. The Communist forces led by Mao Zedong conducted a massive retreat and evaded the KMT attacks in what became known as the Long March. 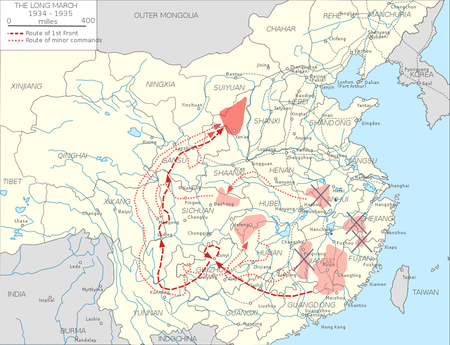 The Long March of the Chinese Communist forces between 1934-35, from its base in Jiangxi province to its new base in Shaanxi province

On 28th January 1932, the Japanese attacked the Shanghai International Settlement in what was known as the Shanghai Incident (or "128 Incident" in Chinese). Anti-Japanese sentiment ran high across the country, but Chiang Kai-shek followed a strategy of “first internal pacification, then external resistance” that entailed eliminating the CCP and appeasing Japan. This changed dramatically in 1936 when his general Zhang Xueliang (the former Fengtian warlord, see above) kidnapped Chiang at Xi'an and forced him to enter a truce with the CCP and form a united front against Japan. Chiang agreed and began actively preparing for the impending war with Japan.

On 18th September 1931, the Japanese planted a bomb in the Japanese owned South Manchuria Railway near Shenyang and accused the Chinese for the attack (known as "Mukden Incident" in English or "918 Incident" in Chinese). This was used as the pretext for the full-scale invasion of Manchuria and 6 months later, Japan set up a puppet state Manchukuo with the capital at Hsinking (today Changchun) and Puyi as figurehead. The Nanjing government complained to the League of Nations, which exposed the Japanese deception and declared Manchuria to remain rightfully part of China. Japan withdrew from the League of Nations as a result. 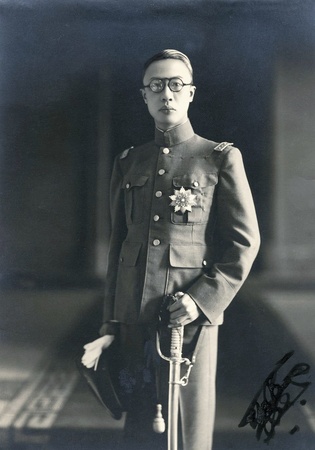 Puyi, the last emperor of the Qing dynasty, was installed by the Japanese as the Emperor of Manchukuo 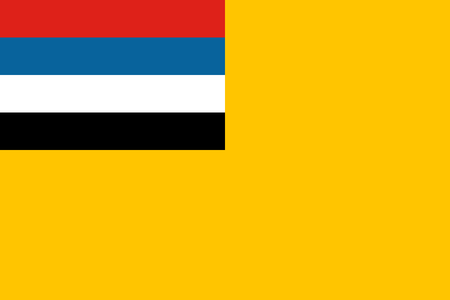 The Japanese effectively controlled Manchukuo in every aspect, with Japanese vice-ministers "assisting" the government, and its commander-in-chief (who was officially the Japanese ambassador) having veto rights on government decisions and functioning like a colonial governor.

The conquest of Manchuria was extremely popular with the Japanese people, who saw it as providing a much-needed economic "lifeline" to their economy which had been badly hurt by the Great Depression. With Japanese investment and rich natural resources, Manchukuo became an industrial powerhouse in Northeast Asia. It received diplomatic recognition from countries like Italy, Spain, Germany and the Soviet Union.

Manchukuo ended when the Soviet invaded in August 1945, few days before the end of World War 2. It was handed back to China the following year and became the base for the CCP during the Chinese Civil War (see my 10th blog). 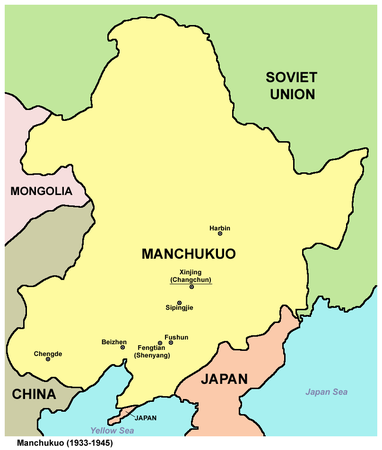 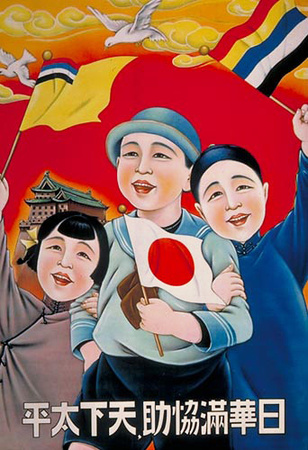 Japanese propaganda poster. The caption says "With the cooperation of Japan, China, and Manchukuo, the world can be in peace."

The end of the eighth blog

I am stopping here before I move on to the Second Sino-Japanese War and World War 2 in detail in the next blog. This blog only covers 25 years of history but it was a chaotic era in the modern Chinese history, and laid the foundation for the events to follow. So stay tuned.

BigGeographyGuy
+1
Level 64
Jul 17, 2021
Cool Blog! I never knew that there was a Chinese Empire just for one year so thanks. I don't really know much about the Sino-Japanese war so I can't wait for the next blog :)
cuotak
+1
Level 65
Jul 17, 2021
The Chinese Empire did not last for one year, not even 3 months. It issued coins and stamps and these became collector items because the period was so short and rare.
MG17
+1
Level 37
Jul 17, 2021
You’re my new Wikipedia: full of nice hyperlinks, amazing formatting, and excellent images! Finally in the Modern China!
cuotak
+1
Level 65
Jul 17, 2021
Yes I'm finally getting there, thanks for following my blog.

I originally thought of including WW2 in this blog but again it's getting too long so I stopped.