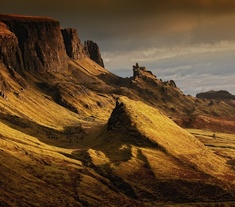 A Wee Nation with Wee Islands

One of my many quizzing passions (which tend to mirror my passions in life) is that of bonnie Scotland. Designing the quizzes that have become part of my 'Scottish Interest' series of quizzes is just a small way of sharing my love for this place with the JetPunk community. The combination of my passion for geography and my passion for Scotland (and sometimes, the additional passion of Scottish football) accounts for more than 12% of the quizzes I have published thus far.

Today, one of the first quizzes I ever published (which happens to be a combination of Scotland and geography) reached 1,100 takes. That may be a paltry sum when one considers the 17 quizzes that have been taken at least 1,000,000 times (here's a shout out to the venerable scambigol, johnnyaitch and relessness, as if they need any more attention), but for a quiz as niche as a list of more than 200 mostly-obscure Scottish islands, I am quite satisfied.

The whole of Scotland is home to fewer than 5.5 million individuals, the vast majority of whom stay in Scotland's 'Central Belt' (which includes her two largest settlements, Glasgow and Edinburgh). Yet these islands are truly wonderful places. Even before the current pandemic, it was my custom to take my holidays within this wee country of Scotland (itself within a relatively large country). One of my favourite things to do is explore the islands. Although Great Britain (which includes England, Scotland and Wales) is itself an island, compared to the topography, climate and culture of the Scottish islands, Great Britain might as well be mainland Europe (I will refrain from offering an opinion on the United Kingdom's departure from the European Union). In my younger years, I had the privilege of living on a small island in the northwest of Orkney.

Without wanting to sound too airy-fairie, there is something 'spiritual' about the islands of Scotland — not disembodied or immaterial, but transcendent none the less, perhaps even supranatural. The Inner Hebridean island of Iona is of particular note, with its ancient Abbey and the graves of several early Scottish kings — according to legend forty-eight Scottish, eight Norwegian and four Irish kings are buried in one particular graveyard called Reilig Òdhrain ('St Oran's Graveyard'). Among those Scottish kings are said to be Duncan and Macbeth, perhaps familiar names to those outside of Scotland thanks to Shakespeare. But perhaps what makes Iona (and all of the islands, for that matter) so 'spiritual' is not that it is home to this religious ephemera. Instead, maybe these relics are made spiritual because they are found in a place in which the line between the immanent and transcendent is so thin.

Islands are chaotic and sometimes inhospitable places, but for thousands of years, at least some of the people of Scotland have found home in these jagged pieces of earth reaching heavenward from the ocean floor (for example, the earliest settlement of Skara Brae on the Orcadian Mainland was more than 5,000 years ago and a lesser-known Neolithic farmstead called the Knap of Howar on the Orcadian island of Papa Westray is even older). Something about the wind and rain, the rugged coastline, the ancient peat bogs, the fields of heather — they can make one feel more alive than ever before. Or at least, that's what I've found.

I've gone all romantic and flowery. Time to sober up with some frank Scots patter – Scotlan's pure braw, by th' way. Thank you for your patience. Guid nicht fae Glasgow.

My plan for retirement in a few years time is to spend a few months island hopping around the Hebrides and North Isles.

I have read a couple of Alasdair Alpin MacGregor's books on the isles and found them fascinating and they've given me a renewed interest in Scotland.

Thanks for the blog from a Southern sassanach!