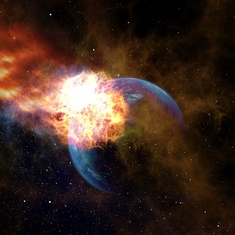 A riddle for you

My great grandmother came into this world with a bang. On the 30th of June, 1908, there was an enormous explosion in Siberia, known as the 'Tunguska Event'. The explosion was so great it was detected as far away as Europe and America. It was 1,000 times greater than that of the nuclear explosion at Hiroshima, and the exact cause is not actually definitively known. The most widely accepted (and most likely) cause of the explosion was a giant meteor, around 65m in diameter, exploding 5 or 6 kilometres above the Earth's surface. Other proposed causes include a huge volume of natural gas escaping from the Earth's crust and subsequently igniting, that it was the work of Agda the Thunder God, and even that the explosion was due to a glitch in the software (since life is actually one big video game). You can make your own mind up about that, but anyway:

Eight days later, on the 8th of July, 1908, my great grandmother was born.

HOW IS THIS POSSIBLE??

A man and his son are in a terrible accident and are rushed to the hospital in critical care. The doctor looks at the boy and exclaims "I can't operate on this boy, he's my son!" How could this be?