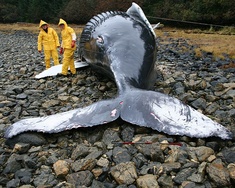 WARNING: Do not continue reading this post if you are of a sensitive disposition, or have an easily upset stomach.

If you live by the coast, then there is a remote chance that a whale might someday end up being stranded in front of your house. Here is some valuable information you will need to have on standby, should that occasion ever arise. First and foremost, here's a little list of fun and pertinent information about cetaceans.

The word cetaceans generally refers to any entirely pelagic marine mammal. There are many kinds of marine mammals, but some, such as sea-otters, seals and sea lions etc. live both on land and in water. But 'entirely pelagic' refers to animals that live purely in the sea and don't come on land. This includes whales, dolphins and porpoises.

What's the difference between dolphins and porpoises?

Dolphins and porpoises are very similar in many ways, and unless you know what you're looking for, it can be hard to tell them apart. Porpoises are generally smaller than dolphins (but that's not much help unless you've got one of each for comparison). One sure fire way to tell them apart is take a look inside their mouths (assuming they let you) as they have different shaped teeth: dolphins have conical teeth, and porpoises have spade-shaped teeth. But what about the whales?

What constitutes a whale?

Whale is actually quite a loosely defined term, and sometimes is used interchangeably with 'cetacean'. Basically the rule of thumb is that whales are BIG. In fact whales are literally the biggest animals on the planet, and of all time! It is because they are pelagic (live at sea) that they can reach such huge sizes, since the buoyancy of water can make them virtually weightless, and grow to as big a size as the food chain allows.

While their sheer size alone is naturally captivating, it is also these magnificent creatures' Achilles' Heel. Though they live in the sea, sometimes they end up on land, or they 'beach'.

Why do whales wash up on land?

If whale dies near the shore its carcass can end up being swept up onto land from the tide. Sometimes a whale can get sick and enter shallower water to rest, or can get lost in turbulent waters or sometimes due to sonar confusing their echolocation (a method whales use to navigate, similar to bats) and run aground. There are also instances of 'mass strandings' in some species of whale, particularly in Pilot Whales. Whale's can't simply get up and walk back into the sea. Furthermore, their immense weight, no longer buoyed up by water, will slowly suffocate the whale and crush its internal organs. Whatever the reason a whale has washed up in front of your house you will need to know how to deal with the situation.

Firstly, is the whale alive or dead?

If the unfortunate animal is still alive, there is very little hope for it. There are some rare instances where extremely devoted people have managed to help whales stranded in shallow water, like this one.

If the whale is still alive, all you can really do is try to comfort it. A whale's skin is quite thin and sensitive, and can blister easily in direct sunlight, so splashing seawater over it will help soothe its skin. It may be very emotional to see such a magnificent creature slowly pass away, but considering that whales are extremely intelligent, it may even feel grateful knowing you are trying to comfort it in its last moments.

If the whale is dead then it is advisable to act quickly. Although the whale itself will mercifully be out of its misery, things can get very messy if you don't act in good time. As with pretty much everything, always leave it to professionals. The first thing you should do (if no-one else has yet noticed a great big whale carcass lying around) is call the authorities. A giant soon-to-be rotting carcass is a major public health concern. Not least because dead whales tend to... explode.

Most whales have a very thick layer of fat underneath their skin called 'blubber', which serves as an energy store and insulates them. The thick layer of insulation keeps the whale's body temperature stable for even up to a few days after death. At this temperature bacteria flourish and get to work decomposing the carcass, which produces gases that cause the carcass to bloat. This happens in lots of animals, but remember, whales are the biggest animals in the world. Imagine a great big water balloon, over 10 metres in length and 10 tonnes in weight, full of rotting flesh and guts, getting more and more bloated with a build up of gas. Not ideal really.

There are many instances of whale carcasses exploding due to the build up of gas. Sometimes these whales have exploded spontaneously, or because people have foolishly punctured the whale, triggering an explosion. There was an instance in the city of Tainan in Taiwan where a dead whale exploded on the back of a truck as it was being transported elsewhere for dissection. Hundreds of people gathered round to see the whale as it was taken through the city. It spontaneously exploded, splattering its innards over everything in sight.

What you must also not do is what the Oregon Highway Division did in 1970 when a dead whale arrived on a beach in the city of Florence and blew it up with dynamite, causing putrid whale flesh to fly in over a 200m radius in all directions.

Thankfully in both instances no-one was injured, but being showered with rotting whale guts is a somewhat unpleasant experience. That's why it's important to be armed with the knowledge of how to prevent such a thing from happening.

Do NOT try to cut the whale carcass open, or else you might trigger an explosion. You must make small perforations to allow the pent up gases in the carcass to be released gradually. Use a large sharp instrument such as a kitchen knife, and make small holes in the whale, ideally on its underbelly. Make a long line of small incisions along the length of its carcass. This will create a loud high-pitched hissing noise as the gas escapes the carcass. When the hissing noise eventually dissipates that indicates you will have reduced the air-pressure of the carcass enough to avert a big messy explosion.

Acting in a timely and calm fashion in order to prevent an explosion is the most important thing to do if you encounter a beached whale. Now all that remains is to remove the carcass, but leave that to the authorities. Unless you are Yoda you won't be able to remove a dead whale on your own. When one blue whale carcass washed up in Canada in 1987, it took five huge bulldozers two days to push it into an enormous pit. Many years later the skeleton of that whale was exhumed and is now on display in a museum (watch the documentary Raising Big Blue if you get the chance).

Do NOT have a hot shower

If for some reason you didn't notice a giant dead whale on the beach, the smell will certainly grab your attention (assuming you have a sense of smell, not everyone does, and they'd be the lucky ones in this instance). Dead things don't generally smell nice anyway, but whales smell particularly bad (lucky for them whales have no sense of smell either). But if you should end up touching a whale carcass, or are unfortunate enough to be splattered with its entrails, the worst thing you can do is have a hot shower. Whale flesh is particularly oily, and washing your skin with hot/warm water causes skin pores to open, allowing the oil to enter and get trapped. You may end up smelling like a dead whale for days. Use cold water instead. Also, remember that oil is hydrophobic, and doesn't dissolve in water (ever noticed how oil doesn't mix with water and just floats on top in little blobs?) so scrubbing harder won't do much either.

-Check if the whale is alive or dead

-Comfort the whale if alive

-If dead, make small incisions to reduce the chance of an explosion

-Stand back if there is an explosion

-Have a cold shower if things get messy

NINJAQKk
+5
Level 57
Nov 30, 2019
This is a blog I never thought I would care about or find interesting. Well done!
HelveticaBold
+1
Level 69
Jan 9, 2020
Thanks! And only a few days after I posted this a whale carcass washed up in Scotland... and exploded! Apparently its stomach was full of garbage :-( Here's an article
CringeDragon
+1
Level 70
Jul 24, 2020
…Why was this the thing I chose to reread while eating lunch
HelveticaBold
+1
Level 69
Jul 25, 2020
Am debating whether to edit to include pictures or not, I'm leaning towards not.
Countries of the World Quiz
US States Quiz
Fast Typing 1 to 100
Countries by First Two Letters in 90 Seconds
Countries by Borders in 90 Seconds
Fifty States in One Minute
Africa Map Quiz
Countries of the World with an Empty Map
NBA MVPs Quiz
40 Historical People that Everyone Should Know
Planets of the Solar System Quiz
Olympian Gods Quiz
UEFA Champions League Winners
Countries that Start with A
Random Countries on the World Map
Random
Top Today