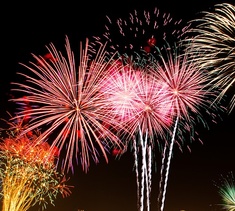 5 Years of JetPunk: A Thank You

Sometime in the spring of 2013, I searched "how many countries do I know" on Google and took the Countries of the World Quiz for the first time. After finishing the quiz (on which my score was 61/196), I left the site and didn't think about it for awhile. But then every week I would come back to try improving my score, and eventually after a month or so I began to start looking elsewhere in the site. This was the start of my experience on Jetpunk.
Despite using the site quite frequently, I didn't actually make an account until over two years later, mostly because I wanted to comment on quizzes (which, looking back on it, wasn't such a good idea because they were almost always 100% with 47 seconds left and I'm only 10!!!!!). Today marks the 5th anniversary of that day. My first quiz doesn't exist anymore. Neither do my second, third, fourth, fifth, or sixth. My seventh quiz (my earliest remaining one) looks completely different than it did when I first created it. In fact, the oldest quiz I have that has stayed the same since its creation is my European Imperialism Quiz, which I made to study for a history test in the seventh grade. I've tried to improve on every quiz I've made, whether that be by adding more answers, SVGs, or just doing more in-depth research to understand the topic better. I've really only become confident in my quizmaking the past year or so, starting about the time I joined the Jetpunk Discord. When checking out the subreddit, I stumbled across an invite link to the server and joined what quickly became my favorite community ever. A collection of both casual and dedicated Jetpunkers, from those that just discovered the site and haven't made any quizzes to some of the most well-known quizmakers who have been around for years. It's a great community and if you haven't already joined I strongly suggest that you do. Not only is it a great way to connect with others who have the same interests as you, but the people there are always happy to help with quizmaking questions or concerns. The server is the way that I first learned to make Multiple Valid Answer and SVG quizzes, and nearly all of the quizzes I have made in the last year were influenced at least partially by something from the Discord. If you haven't figured it out yet, this whole paragraph is just an advertisement, but I feel the need to because it's an amazing community and has helped me so much. I'd also like to talk about some of the users that have helped or inspired me throughout my time on Jetpunk:
ander217 - one of the first Jetpunkers I became aware of and a familiar name to anyone who reads the comment sections of quizzes, ander's stories always fascinated me, and still do. Everytime I come across a new one of her comments, I get a glimpse into another world that I've never been able to experience. And this goes for all anecdotal comments, really; ander is just someone who does it consistently and whose comments I enjoy reading every time.
kalbahamut - debatably the most famous Jetpunk user ever, just about anyone who has been using the site longer than a week has come across his name at least once. Whether you agree with his opinions or not (and oftentimes I don't), it's undeniable the impact he has had on this community. Whenever he gets into an argument with another user the comment thread is extremely entertaining to read, and I appreciate that Kal isn't afraid to offend anyone, no matter what side of the political or social spectrum they may fall under. His methods of reasoning have made me think about things in completely new ways, and I always learn something from his anecdotal comments.
Stewart - I vaguely knew about Stewart because of his unique map and SVG quizzes but I wasn't too familiar with him, until I joined the Jetpunk Discord in March 2019. Stewart is the admin of the server, and he helped me to make my first SVG quizzes last summer. He's done an insane amount of work for Jetpunk, incorporating suggestions from those of us on the Discord and doing huge updates like User Analytics (which I use hourly) and more recently the SVG Update. As I've gotten to know him better I learned that not only is he amazing at quizmaking, but also a great person that I'm happy I have been able to get to know.
IAB - one of the other quizmakers known for making huge quizzes, I met IAB through the Jetpunk Discord as well, all the way back when he had only one feature. He has helped me with map quizzes and just been in general a great person to talk to. Seeing him work on projects like his subdivision series for months gave me inspiration to make larger and more complex quizzes, especially ones with maps.
Jiaozira - my favorite quizmaker for a long time, Jiaozira is an amazing mapmaker whose level of skill I strive to achieve in every quiz I make. I've never seen a Jiao quiz I didn't love, and if you haven't checked out anything he's made I strongly suggest you do. If you didn't notice, the sections have slowly been getting shorter as the blog goes along. This is because I only have 30 minutes until today is over and I'm trying to get it done so this is all I'll write. Have a great day everyone!
UG332
+7
Level 63
Sep 18, 2020
Crazy to think 5 years ago, a legend on the server joined XD. You're definitely one of my biggest inspirations

Glad I got to meet you man :D

ducklingpanda1245
+4
Level 48
Sep 18, 2020
Congrats on five years!
KingEureka
+4
Level 54
Sep 18, 2020
Congrats on having an account for 5 years on jetpunk! I do not remember the exact date, but I think I too have my 4 year anniversary this week.
IAB
+8
Level 55
Sep 18, 2020
Congratulations on 5 years! 💜
Pandora49
+6
Level 51
Sep 18, 2020
Congrats Jeremy! :)
dug28
+4
Level 73
Sep 18, 2020
Congrats Cringe! You’ve definitely made your own significant contributions to jetpunk... amazing map quizzes (especially cities), discord vip, and king of the gray box!
BotswanaEmperor
+4
Level 59
Sep 18, 2020
Congratulations on 5 years Cringe! You've definitely brought some good stuff to this site in the past 5 years and I'm sure you will in the future!
MG17
+5
Level 21
Sep 18, 2020
CONGRATS! I want to help you one day :)
MG17
+1
Level 21
Sep 18, 2020
YOU DO EXCELENT QUIZZES!
TheRealGrantma
+3
Level 57
Sep 18, 2020
Congrats on your achievement! You have been a very helpful person, and you taught me how to make SVG maps, which i am very thankful for. :)
baptistegorce
+3
Level 36
Sep 19, 2020
Huge congratulations for your work in JetPunk which is just excellent! I particularly like your map quizzes. Continue like that!
SaturnTheQuizzer
+6
Level 66
Sep 19, 2020
Congratulations Cringe! You're definitely a great member of Jetpunk community and a talented quizmaker. Keep up the good work bud!
JesseH
+3
Level 44
Sep 19, 2020
Congratulations. I can relate to you when you said you were on the site for a long time but hadn't made an account. I have been on jetpunk for around a year but hadn't created an account until last week.
JesseH
+5
Level 44
Sep 20, 2020
The way I found about JetPunk was actually a bit weird. I originally was on Sporcle however my Adobe Flash crashed and I had to find a substitute to test myself and then I found JetPunk.
ClutchNferno
+1
Level 54
Dec 6, 2020
Lol, same. When I was ten my class was aloud to do things on the computer. I liked flags and quickly found Orcspel. The entire site was so confusing so I searched up again and found JetPunk. Some people are confused why I know what I do but it's a fun and good learning platform. Orcspel- You blew your chance ;)
FlabberBapper
+5
Level 65
Sep 20, 2020
Happy 5 years homie, crazy long
JesseH
+1
Level 44
Sep 22, 2020
How do you get spaces in your post, when I write it all just sticks together in one long paragraph.
MG17
+1
Level 21
Oct 27, 2020

Pandora49
+1
Level 51
Oct 30, 2020
or &ltp>
sealsi6
+6
Level 55
Sep 22, 2020
I'm so late but congrats on 5 years dude, we haven't known each other for too long but I'm glad to have met you
vermiciousknid
+3
Level 83
Sep 25, 2020
Congrats on five years! I'm consistently impressed by your offerings, especially the maps. I never would have guessed you were a teenager just from taking your quizzes.
ClutchNferno
+1
Level 54
Dec 3, 2020
Congratulations! I have taken many of your quizzes since I started JetPunk two years ago when I was also ten. I can also understand waiting a while to create an account. I have noticed you make SVG maps on many quizzes; I have an interesting quiz idea, yet I'm currently inexperienced with making SVG's. Is there any way I could get a map?
CringeDragon
+1
Level 71
Dec 3, 2020
Thanks! Making SVG maps really isn't very difficult and I'd recommend making them yourself if you can. If you'd like to learn I would suggest the SVG Guide as a good starting point. If there's an already-made map you want to use there are ways to take them off of quizzes (if you get permission, of course). If you have any questions feel free to email me at jllarson2005@gmail.com (since I generally don't like to explain in-depth topics in the Jetpunk comment section). Hope this helps some, and happy quizmaking :D
ClutchNferno
+1
Level 54
Dec 5, 2020
How do I make a non-answer on an a-z quiz. Also how do I do one for example like (Russia) but it's not an answer.
CringeDragon
+1
Level 71
Dec 5, 2020
I assume you're talking about grayed-out answers like the Ruhr in city quizzes? If so, the easiest way to do this to change the grid from Auto to Manual in the Design Grid step of the quiz editor; then insert a cell where you want it and type the non-answer you want to display.
ClutchNferno
+2
Level 54
Dec 6, 2020
Thanks for all the help Cringe. I would've never been able to make grey rows for this relatively simple quiz: https://www.jetpunk.com/user-quizzes/1341585/biggest-countries-in-europe-a-z
Countries of the World Quiz
US States Quiz
Africa Map Quiz
World Capitals Quiz
NBA Basketball Teams Quiz
Country Flags Quiz #1
U.S. Presidents Quiz
12 Months in 15 Seconds
Two Letter State Abbreviations Quiz
Random Country to Capital
Disney Animated Characters Quiz
Harry Potter Last Names Quiz
Countries that Start with P
Brand Logos Quiz #2
Ultimate Harry Potter Name Game
Random
Top Today