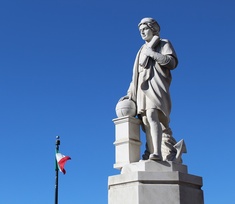 There’s been a lot of controversy surrounding Christopher Columbus and his legacy, and seeing as today is Columbus Day in America (at the time of posting), I wanted to discuss it.

Part I: Columbus Day Around the World

Christopher Columbus landed in the Bahamas on October 12th, 1492, becoming the first European to sail directly across the Atlantic Ocean, from Gran Canaria in the Canary Islands to San Salvador in the Bahamas. Columbus Day is celebrated in most American countries (with the exception of Brazil), while Spain and Italy also recognize (but don't celebrate) Columbus Day.

In the United States, Columbus Day falls on the second Monday of October, while everywhere else, it’s celebrated on the 12th of October. In the United States, the holiday is simply known as Columbus Day but it’s goes by many different names. In Mexico, it is known as Dia de la Raza, or Day of the Race, referring to the Iberoamerican race, meaning people from all of the former Spanish and Portuguese colonies in the Americas, occasionally with the addition of Equatorial Guinea. In Spain, it’s known as Día de la Hispanidad, or Day of the Hispanic Community. Columbus Day was renamed to Fiesta Nacional (National Day) in 1987 in Spain, but it became a national holiday six years prior. Giornata Nazionale di Cristoforo Colombo, or National Cristopher Columbus Day is the Italian name for Columbus Day, but Columbus Day isn't celebrated (Christopher Columbus the person is, however). It is Día de las Américas (Day of the Americas in English). Peru has a different way of seeing the day, calling it Indigenous Peoples' and Intercultural Dialogue Day, or as it's called in Peru, Día de los Pueblos Originarios y el Diálogo Intercultural.

Christopher Columbus was the first European to sail directly across the Atlantic and began the movement from Europe to the Americas. Many inhabitants of American nations believe they owe their nation to Columbus and his discovery of America. In the United States, Columbus is also a symbol of Italian-American pride, as Columbus was born in Genoa, only turning to Spain for ships and a sponsorship. In Europe, only Spain and Italy really celebrate Columbus. Christopher Columbus was Italian and claimed land for Spain, giving pride to one nation and power to another.

Christopher Columbus, like many others, wasn't perfect. Many of his actions had devastating consequences for indigenous people, His mission to discover the New World had disastrous implications for natives, inviting the power-hungry empires of Europe into the newly found continents. Many natives were subject to abuse, discrimination, and on multiple occasions, genocide. The events of the near future would also spell trouble for indigenous people, with the spread of Old World diseases like smallpox, measles and chicken pox. The natives had immune systems that had never had to deal with diseases, allowing the diseases to spread like wildfire and kill in droves. The spread of disease was unintentional, but he nevertheless introduced new plagues to the Americas. In the United States, some more extreme Black Lives Matter protestors (emphasis on extreme) have downed statues of white figures that have done things that have harmed black, indigenous and Asian people, including Columbus, as well as Robert E. Lee and other Confederate war "heroes". The last argument against Columbus is the fault of historical inaccuracy. Columbus was, in fact, not the first European to reach the Americas, and definitely not the first person to reach the Americas (the indigenous people were). Amongst Europeans, Leif Erikson was the first to reach the Americas, sailing across the cold Arctic waters of the Atlantic half a millennium before.

The most popular alternative for Columbus Day is Indigenous Peoples' Day. Indigenous Peoples' Day, occurring on the same day as Columbus Day, is dedicated to the natives that were decimated by disease and violence, as opposed to the person who unknowingly brought death upon them. Peru has taken that lead, with South Dakota also following suit. Comedian Trevor Noah jokingly made another suggestion for a Columbus replacement: Dr. Anthony Fauci of the National Institute of Allergy and Infectious Diseases, the physician and immunologist in the United States' HIV/AIDS research team and COVID-19 Task Force. Noah listed the following reasons:

Columbus is a polarizing figure, being the pride of two nations while being the bane of the natives of two continents. I'd like to see some opinions, and some new views on this issue.

and many more. Most of these were bad, but who knows what would have happened to Europe if France didn't finance the American Revolution and the monarchy stayed in place? There would have been no revolution, no Napolean

yeetdeet
+1
Level 60
Oct 19, 2020
That's a good point. I do think that democracy in Europe (besides Athens) owes a lot to the USA and Columbus for discovering the Americas, but the democracies came at the expense of many Native Americans and soldiers lost in the events that you mentioned.
Historyman0
+1
Level 37
Apr 14, 2021
i dont know why people wait so long until now adays to attack columbus for everything he did 600 years ago
yeetdeet
+1
Level 60
Apr 14, 2021
I think it's a combination of people being able to know more about people who lived a long time ago (both good and bad) as well as society changing. Obviously not everything he did in the late 15th century is going to be acceptable now and not everything that we do will be seen as socially acceptable in the 2700s.
User Blogs
:: yeetdeet's Blog
:: This Blog
Countries of the World Quiz
US States Quiz
NFL Football Teams Quiz
World Capitals Quiz
NBA Basketball Teams Quiz
Fast Typing A to Z
Africa Map Quiz
Europe Map Quiz
Island Countries Quiz
Countries of Europe Quiz
Letters of the Greek Alphabet Quiz
Europe Capitals Quiz
Countries that Start with B
Countries that Start with I
Countries that Start with P
Random
Top Today
History