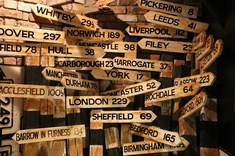 There are three puzzles, each sets of seven clues. On the first day, I'll release one clue for each puzzle. The three puzzles range from easy to hard and you have to find the thing that connects the clues. If you think that you know the answer, put it in the comments and I'll tell you if you're right. If you want to figure the puzzles out yourself, don't open the comments. This is for fun. Clues will be added around 5:00 PM UTC/12:00 PM EST/9:00 AM Pacific daily. You can guess once after each clue is added and all guesses after that will be ignored.

This week's clues are cryptic clues. You must find the connections between answers for these clues. These are much harder than other weeks, as you have to solve the clues (however, connections have been made easier).

If you don't know how to solve a cryptic clue, this Wikipedia link is genuinely helpful. These two quizzes are also really helpful:

Beheaded and befuddled Greek goddess of harmony in Europe (7)

Not after disturbed Christian or Gareth in the Middle East (7)

Nation has bizarre symbols of royalty (7)

Bowman is taken from guitars (11)

Ram gets an abstract raise (5)

A fox saw absurd French electrification in the past (9)

Hearing illumination to the south (8)

Saw someone leafing through a book in the city (7)

East side of Teflon Don’s city (6)

If you want an explanation, ask me!

The first clue should be referring to Denis healy