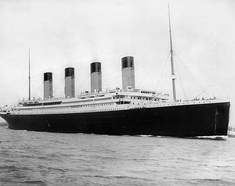 Have you watched the 1997 movie Titanic? Or maybe the 1958 film A Night To Remember? Both of these films have something in common: they are both about the story of the Titanic. The Titanic was a gigantic ship that was once the largest in the world. With a capacity of 2,000 passengers and crew, it took more than three years to build. But after all that building, it only took three hours for it to hit an iceberg and sink. That said, there may have been more factors in the Titanic's demise. In this article, I will be exploring the building, voyage, and sinking of the Titanic.

The Titanic was part of the White Star Lines. When it became bankrupt, Thomas Ismay bought it. Then in 1902, J. P. Morgan bought it for the International Mercantile Marine Company in hopes of controlling the transatlantic market so he could make more money. A few years later, Irish company Harland and Wolff started making ships for White Star. Things were going great with millions of people immigrating from Europe to escape poverty, persecution, or famine.  With that, let's take a look at how Harland and Wolff created the Titanic.

Designing and Building the Titanic

Something that I don't remember is that it took a long time to build the Titanic. Designing started as early as July 1908 when White Star's owners agreed on a new design for their ships. Thomas Andrews was the ship's designer. He spent five years learning how to build ships when he became the director. He was the leader of the guarantee group, who would travel and solve problems on maiden voyages. Later that year, Harland and Wolff put up a large steel frame to hold the ocean liners. There were workshops for every single thing on the Titanic, from the furniture to the engines. By April 1910, workers finished the Titanic's framework. It took another six months to complete the plating. Rivets can hold the frame together. How it works is that when you heat it, it fits between two hull pieces. Once you hammer it, it is stuck there. However, this doesn't take away the fact that it was super loud. Harland and Wolff paid the workers each Friday. The most skilled workers received 10 dollars, while the unskilled workers got 5 dollars. There were fines such as stealing tools, being lat, or even making tea. Plus, hundreds of people lined up for work if the managers fired any of the workers. Also, there was danger working, with 252 casualties and seven building and workshop deaths. The Titanic had ten decks. Each deck had first-class passengers got the middle of the deck. That was because the middle of the deck had less movement than the sides. The crew reserved the bottom decks were mainly for third-class passengers as well as boilers and storage.

As I mentioned a little earlier, the first-class got the best seats. Not only did they get the center parts of the ship, but they also had a grand staircase, Turkish baths, and even a swimming pool! The first class also had access to several rooms such as a lounge, the reading and writing room (for women only), the smoking room (for men only), a gym, a dining room, an exclusive restaurant, two dining rooms, and even three elevators. There were many more things for first-class passengers to do, such as swimming, cycling, listening to a band, or playing the piano.  Breakfast was from 8-10, lunch from 1-2:30, tea was at 4, and dinner was  7-9. As mentioned before, the first-class had access to two dining rooms. Dishes served included eclairs, oysters, and even caviar. At midnight, the crew switched off all the first-class lights. Plus, there were 225 stewards for the 329 first-class passengers, which meant that one member served 1.5 passengers. All this was great. Now, what, you may ask, was the price? Well, it was $4,700. Not bad. But if we account for inflation, this would be $87,000. That's a lot of money. No wonder that most of the first-class passengers were millionaires.

Second-class passengers enjoyed several of the services that the first-class passengers enjoyed, but there weren't many. Most of the second-class passengers were teachers, priests, servants, and the band stated prior. There were beds, and the rooms were pretty nice, like the first-class. There was a smoking room, a lounge, a dining room, and an elevator, just like first-class. There was also a barbershop, where barbers sold toys, souvenirs, postcards, and pens. The cabins were comfortable, but it wasn't as great as the first-class, as the beds connected to the walls. The passengers could spend their time reading, writing, or playing games. The lounge had many books and even a steward. Breakfast was from 8-10, lunch at 12:30, tea at 4, and dinner at 6:30. The food, curry or fish, was healthy but not as fancy as the first-class food. Service was a little slower because there were 76 stewards for 285 passengers or one steward for about four passengers. The fare was a little more reasonable at $66, which adjusted for inflation is around $1,300 in today's money.

The third class was the one with the best fare. The fare was $15, which is $300 in today's money. The third-class passengers were mainly immigrants coming from Europe. However, the rooms and the overall experience weren't that great. There were two dining rooms, a smoking room, a lounge, and many more rooms. The lounge had many books, like a library. However, the meals were a bit awkward. From 8-9, the chefs served breakfast, broth for women and children at 11, dinner at 1, and tea at 6. Yeah, it is awkward. Also, the rooms in third-class cabins can be very loud because of all the dancing and singing.

The management ranked all 899 crew members in order. At the very top were Captain Edward Smith and his officers, in the middle were the stewards, and at the very bottom were the stokers and trimmers, the workers tending the furnaces. Other jobs included 66 staff who ran the restaurants, a band of eight who played at the restaurants, five postal clerks, and two radiomen, Jack Philipps and Harold Bride, who you will hear more about later. And with that, the titanic was ready to launch. The ship had to carry a lot of cargo. There were 36,000 apples, 200 barrels of flour, and 75,000 pounds of meat to serve the 7,000 meals served per day to the crew and the passengers, along with 1,500 gallons of milk and 20,000 bottles of beer. The Titanic even carried 440 gallons of ice cream! But there's another thing you need to power a ship: coal. The stokers and trimmers were constantly wheeling and shoveling coal into the boilers. Each day, they would shovel up to 825 tons of coal. That said, the Titanic carried 5,892 tons of coal. Other things that passengers brought included a car and 23 cases of ostrich feathers.

Right before departure, the stokers, who worked the furnaces, reported a fire in one of the coal bunkers. The crew ordered them to control it until they got to New York. In the days before launch, two special boat trains (one for first-passengers) operating from London to Southhampton led the 958 passengers to the Titanic. On April 10, the Titanic set sail. Things were off to a rocky start when the propellers sucked another ship into a collision course with the Titanic. Thankfully, Captain Smith saved the boats from the collision. The boats headed to Cherbourg, France, to pick up 274 passengers. Then, it left for Queenstown (Cobh), Ireland, to pick up the final 123 passengers. Then, the ship started off to New York. All-day and night long, other ships were sending ice warnings. Many times, the radiomen were annoyed by them and didn't tell the bridge. At 11:07 pm, the S.S. Californian sent the last ice warning to the Titanic. Once again, Jack Phillips ignored the warning. And this is where all the trouble begins. You see, one of the officers originally on the Titanic was transferred to another ship at the last second. He held the key to a cabinet that contained one thing that would have saved the Titanic: a pair of binoculars. The lookouts didn't have it, and they couldn't get the binoculars. Then, the lookouts spotted an iceberg right in front of them. But by then, it was too late. The Titanic rubbed against the iceberg for ten seconds. The iceberg clawed through the hull. Believe it or not, most of the passengers didn't think the Titanic sink. But the scared look on Thomas Andrews told the true story. People started boarding the lifeboats, with women and children first, although the lifeboats could only hold half of the passengers and crew. Many of the lifeboats weren't half full. At 2:05, the last lifeboat was launched, right before the Titanic sank. The radiomen sent distress calls, but the S. S. Californian's radio operator had already gone to bed. The S. S. Californian was only 17 miles away and could've potentially saved more passengers. Instead, the RMS Carpathia came to save the survivors, numbering in about 700.

The sinking of the Titanic was a big deal. What was once a symbol of man's achievement and confidence became a symbol of overconfidence. Out of more than 2,000 people on board, only 704 survived. One of those who survived was Harold Bride, one of the two radiomen. His feet were so frozen that he couldn't even walk and had others had to carry him from the ship. The British and American governments held inquires, which led to laws about lifeboats and many more. Hopefully, this story can be a learning lesson for all of us. 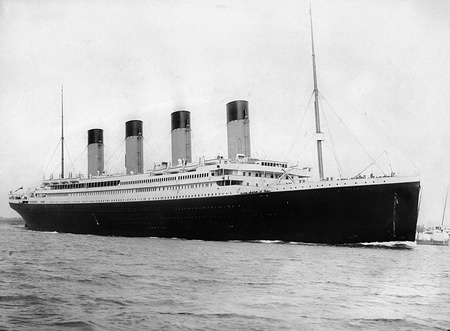 MG17
+5
Level 28
Apr 3, 2021
That’s nice! Curiosity: A writer "predicted" the sinking of the Titanic. To say that he "predicted" is an exaggeration (hence the quotes). But the coincidences are so great that they are frightening. In 1898, therefore 14 years before the famous shipwreck, Morgan Robertson published a book that tells the story of the Titan ship, which sank after colliding with an iceberg. Two other impressive coincidences: the surname of the captain (Smith) is the same in reality and in fiction; in addition, both shipwrecks occur in April...
MG17
+2
Level 28
Apr 3, 2021
One thing, in the blurb, there is written “In this”. Looks you exceeded the limit of characters.
StopAAPIHate
+1
Level 52
Apr 3, 2021
I remember reading about that a while ago, but I kinda forgot about it. That's a little creepy, isn't it?

I think I did exceed the limit, but I just fixed it now. Thanks for letting me know!