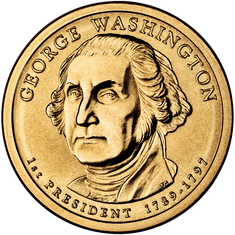 And before you say it, yes, most of this stuff is off of Wikipedia, but I can guarantee that you are not going to read Wikipedia articles on parents of presidents just for fun, and therefore would not have known about this if I had not written this, now without further ado...

Augustine Washington was born on November 12, 1694, in Westmoreland County, Virginia, somewhere around the modern day middle of nowhere. In all seriousness he was born about 60 miles southeast of Washington D.C., and about 85 miles south of Baltimore. His father, Lawrence Washington, George's grandfather, was born in Virginia and sent to England to learn, and when he returned and became a captain in the local militia and a member of the House of Burgesses. When Lawrence died in 1699 Augustine inherited 1,000 acres of Virginia land and some of his father's slaves. In 1715 Augustine came of age, and therefore received his fathers inheritance, he then married Jane Butler, George's stepmother, an orphan who inherited 640 acres of land from her deceased father. Augustine had 4 children with her, only 2 of which survived to adulthood. He was very active in his local Anglican church and Colonial politics, becoming the Justice of the Peace for the Westmoreland county court in 1716. In 1718 he bought a piece of land next door to his inherited property and 8 years later built a house on it. Sadly, his wife Jane died in 1728 or 29, (we do not know which) while he was on a combination business trip and check-up trip on his sons that he sent to England to learn. Two years later he married Mary Ball, George's mother, let's talk about her now shall we?

Mary Ball Washington was born as Mary Ball somewhere between 1707 and 1709, again we do not know very precise details about that time period. She was born to a wealthy family in Virginia, and her father was Joseph Ball, born in England in 1649 and as a child he came to the colonies with his father, the great grandfather of G.W. . When she was just three her father died, and 9 years later her mother died as well, afterward, by her mother's will, she was placed under the guardianship of George Eskridge, a local lawyer. After Jane died, George Eskridge supposedly introduced Mary to Augustine, weather that is true or not is not known, it does not matter anyway because they married on March 6, 1731. (From now on we are going to talk about both Augustine and Mary together now, because the stories of them are together for the rest of the biography.) One year later Mary gave birth to her first child and Augustine's fifth, George Washington. Mary then went on to give birth to 5 more children, 4 sons and a daughter, and the daughter, Mildred, unfortunately died before her second birthday. Augustine died three years after his youngest child died in 1743, leaving behind a wife, two children with Jane Butler, five more children with Mary Ball, 64 slaves, and land, some of which would later become Mt. Vernon. Now the land that would become Mt. Vernon was inherited by his oldest son Lawrence, who, if he died without children would give the property to his second oldest son, Augustine Jr. . However, if Augustine Jr. did not want the land, it would be given to his third oldest son, the famous one, George. Mary Ball lived on her deceased husband's land until she moved to Fredericksburg, Virginia, where she lived until her death on August 25, 1789, long enough to see her son win the revolutionary war, become president, and secure his place in history.

I hope you have enjoyed this, it has taken a lot longer than I thought it would, about four hours of work, so as a result I am going to change this to a "upload one when I feel like it" series, I will make a effort to make them a regularly as I can though, thanks for reading, and please take my quizzes, they are really good if I do say so myself.

Also, thank's to Stewart for helping me find out how to make this blog not look horrible.