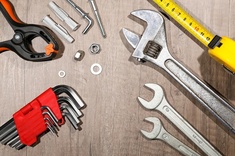 Chapter One: The Contest

Le Mafia was exhausted. He had just spent the whole morning trying to explain to some deranged lady that her electric scooter would no longer work. Apparently she thought this thing was alive, and started singing about how she "couldn't live without her scooter." After a long time she left with a group of weirdos who also happened to be riding along on electric scooters. While she was leaving he held out the TIP jar hopefully. At first she gave him a dirty look, but then, seeing the jar, she smiled and said: "How sweet of you!" Then she grabbed a few bucks and blasted away on another electric scooter screaming: "COKES ON MEEEEEE!!!!" Le Mafia cursed silently, and stalked back into his store. He went to bed early that night thinking that he might go insane if he ever again saw another electric scooter. He awoke later that night to the sound of knocking. He peeked at his clock and saw that it was 1:00. "What in the name of..." he muttered opening the door. A man no older than twenty was standing outside clutching an enormous bag of envelopes, and standing next to a motorcycle. He looked up and bluntly stated: "Are you Mr Hillard Mafia of 872 Hayward Drive?" Le Mafia was taken aback. "How does he know my real name?" He thought. Nodding silently, Le Mafia peeked over the mans' shoulder and saw that there wasn't a single car on the normally busy street. The stranger continued: "You are hereby invited to the annual mechanics competition, a challenge for the best mechanics on Earth! Starting this year, by the way." "How is it annual if it's starting this year?" Le Mafia questioned. "I'm just reading the script dude, I didn't write this." He replied. He took the invitation from the man and read it over. "It's being located where?!" Le Mafia said in disbelief of the name of the location. "Norway!" Said the man enthusiastically. "Listen, it's nice of you to tell me this, but I'm just a simple mechanic in California USA! I hardly make enough to feed myself! How do you expect me to fly to another country!?" Le Mafia exclaimed. "We provide transport! As long as you accept! And there is a cash prize!" The man said, bouncing on the balls of his feet. Le Mafia thought it over, and decided on his final choice. "Alright, I'll attend." "EXCELLENT!!!!" The man yelled, and he gave Le Mafia a plane ticket, and then sped away on his motorcycle. Le Mafia looked at the ticket and frowned. How was he going to compete with the best?

The Plane ride was relatively smooth. Apart from the baby that puked in the seat in front of him. When Le Mafia landed, he got in his rental car, a small silver KIA. He got out his IPhone and set the directions on google maps towards the Oslofjord Convention Center. He had a felling of nervousness in his stomach as he pulled into the parking lot. He pushed open the glass doors and saw a large gathering of men and woman varying in age and height. A man walked up to the stage and tapped on the microphone. "Attention! Welcome! Welcome I say! To the grand opening of the annual mechanics competition! Otherwise known as THE WRENCH!" A woman in the audience raised her hand. "Yes?" The man asked. “If it’s annual, then why hasn’t it been done before?” She questioned. “I’m reading from the script lady! How should I know?” He said, clearly agitated. Then the doors in the back of the room burst open. A stout man with black sunglasses walked down the isle, smirking at the person on the stage. People were gaping in awe at this new arrival, people were pointing and gasping. "Obviously they know something I don't."  Le Mafia thought. The man on stage spoke. "You're late, El Porto. The new man gave a shifty grin and said in a Russian accent, "I come when I want, where I want, how I want." Le Mafia already knew this guy was gonna be trouble. "To those of you who don't know, this is El Porto, widely considered the worlds best mechanic." Said the man on the stage. El Porto did a little bow, and sat down up front. The man on the stage continued. "As I was saying... The first challenge that will decide whether you are fit for this competition or not will take place in two hours! There are 64 of you here today, and only half of you will be continuing to the next round! Now enjoy yourselves, our buffet is open!" Le Mafia tried to make his way to the food, but El Porto cornered him, looking kind of angry. "Remember me?" He said. Le Mafia racked his brains, thinking when he had seen this guy. Then it hit him, he had once worked for El Porto. He ad been an assistant, but El Porto fired him for being too creative. Le Mafia, suddenly felt upset, and betrayed. "I'm gonna whip you in this competition Mafia!" said Porto. "Why's that you jerk!" Le Mafia retorted. "You messed up my greatest invention! Now you're gonna pay!" El Porto yelled. Le Mafia stepped back. He had no idea what this man was talking about. "You're insane." He whispered. "Insane? WE'LL SEE WHO'S INSANE AFTER THE FIRST COMPETITION! YAAAAAAAAAAAAAAAAAAAAAAAA!" Screamed El Porto running off, and sending a table of food flying. "That man is as crazy as he is talented." Said one person. Le Mafia just stood there, wishing he hadn't come.

Thanks for reading! This is my first blog. Its a little short I guess. Thanks!

There will be 2-3 chapters per blog in this series. Feel Free to leave any suggestions you want!

MG17
+4
Level 28
Apr 19, 2021
Congrats on level 30, but this formatting is confuse for me. Organize them by lines :)
ChineseChen
+3
Level 62
Apr 19, 2021
Yeah, a spaced out script would be better.
ClutchNferno
+2
Level 58
Apr 19, 2021
Just so that any of you have any context of what is going on, a while ago me and Nazgul wrote a story about some crazy scooters and as a joke I had one of them dying so I invented a character called Le Mafia the Mechanic to try to save him. What a surprise to randomly see his name now, a couple of months later, on the RUB! Good story Nazgul, and with a little help you can sharpen up your writing skills! :)
ClutchNferno
+1
Level 58
Apr 19, 2021
There is some parts where you randomly switch to first person though.
Nazgul
+1
Level 30
Apr 19, 2021
Yea, I fixied that. Thanks for pointing it out!
Nazgul
+1
Level 30
Apr 19, 2021
Thanks Clutch!
User Blogs
:: Nazgul's Blog
:: This Blog
Countries of the World Quiz
US States Quiz
Countries by First Two Letters in 90 Seconds
Country Flags Quiz #1
Countries by Borders in 90 Seconds
Fast Typing A to Z
World Capitals Quiz
Europe Map Quiz
Countries of Africa
U.S. States by First Two Letters in 30 Seconds
Brand Logos Quiz #1
Canada Map Quiz
Central America and Caribbean Map Quiz
Mythical Creatures Quiz #1
South America Map Quiz
Random
Top Today
Story