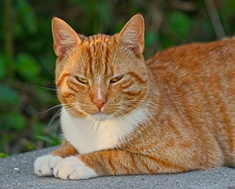 This year I've tragically lost, not one, but two ginger cats.

One was Sparky, the miracle kitten who randomly appeared in our garage. He moved into our home one winter, and lived with us for just over three years, before passing away on the 9th January following a brief illness. I have scarce cried my eyes out so much in all my life, but I'm sure I'll write all about Sparky in due time.

And the other was Tootsie, whom we adopted when he was a kitten. His mother, a beautiful white Siamese, was rescued from a garden shed. She'd given birth to Tootise's litter in the shed, having been locked in there by an abusive neighbour. Tootsie was a strange little cat, but very loveable. He was quite anxious most of the time, but over the years he became more settled. He passed away quite suddenly, on the 29th August, only a few days ago, just shy of Ginger Cat Appreciation Day. He was about 12 years old.

He had a favourite spot in the back garden where he'd always sit and relax. Cats tend to have favourite spots to sit. Even in winter you could often find him there. This is where we found him. He must have curled up to go to sleep, and then peacefully drifted off to Kitty Heaven.

Now they are both buried side by side by the pond, mere yards from Tootsie's favourite spot. Sparky adored Tootsie, and would always cuddle up next to him. I'm thinking of planting some orange flowers, maybe some Californian poppies, on where they are buried. Can you recommend a nice orange flower that likes a cool moist climate?

Some interesting facts about ginger cats:

Ginger is not a breed: There are different patterns of ginger cat, but these can actually present in multiple breeds of cat.

Garfield is an accurate depiction: Long haired ginger cats are known for being very relaxed and gentle (i.e. lazy) and also very prone to being rapacious (not having their hunger easily satiated).

A missing cat turned up on TV: A ginger cat named Marmalade went missing in a town in Cornwall for a while, but thankfully was found. When the political debate programme Question Time was filming there, Marmalade made an appearance on screen, casually walking past the panel as they were engrossed in political and economic matters which are of no concern to cats. Here he is.

Do you have a ginger cat?